Jesus did not Come to Destroy The Law but Fulfil 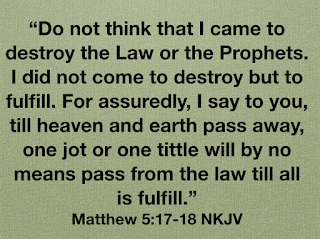 Note: I acknowledge that there is no suppose private interpretation of the bible scripture (II Peter 1:20) hence, I subject this writing to other spirit. Should you find my writing to be totally wrong, I would then appreciate if you could correct me and or rebuke me (II Timothy 3:16). Let's reason together (Isaiah 1:18) so as to bring the matter into the light, I can be reach at sherwincablao@gmail.com.

“Do not think that I came to destroy the Law or the Prophets. I did not come to destroy but to fulfill. For assuredly, I say to you, till heaven and earth pass away, one jot or one tittle will by no means pass from the law till all is fulfill.” Matthew 5:17-18 NKJV

He indeed not came to destroy the law or the prophets but to fulfil. In the old testament it was prophesize:

“But you, Bethlehem Ephrathah, Though you are little among the thousands of Judah, Yet out of you shall come forth to Me The One to be Ruler in Israel, Whose goings forth are from of old, From everlasting.”Micah 5:2 NKJV"

And, it happened that He came but not descended from the line of priest (levites) but descended from the line Judah as prophecies in which, there was no law concerning priesthood from this tribe. What law then is He going to destroy, when in in the first place there was no priesthood law written for priest that will come from the line of Judah? He did fulfil the law and prophecies but, in effect, He has all the right to change the priesthood law. All laws (the law of offering and tithes) relating to priesthood ended in the cross hence, obsoleted. As the bible say;

“For Christ is the end of the Law [the limit at which it ceases to be, for the Law leads up to Him Who is the fulfillment of its types, and in Him the purpose which it was designed to accomplish is fulfilled. That is, the purpose of the Law is fulfilled in Him] as the means of righteousness (right relationship to God) for everyone who trusts in and adheres to and relies on Him.” Romans 10:4 AMP

"In that He says, “A new covenant,” He has made the first obsolete. Now what is becoming obsolete and growing old is ready to vanish away.” Hebrews 8:13 NKJV

Unlike the levitical priesthood whose priesthood were prevented by death for continuing, Jesus Christ priesthood ministry is never ending. He can never be replaced by anyone. As the bible say;

“Also there were many priests, because they were prevented by death from continuing. But He, because He continues forever, has an unchangeable priesthood.” Hebrews 7:23-24 NKJV

For this reason, we christian acknowledged that, no priest should ever perform the burnt offering, heave offering or any other offering that was perform by the levitical priest. But for whatever reason, the tithes to which was also commanded to be receive by the levites has been adopted by us Christian.

One might say, Abraham tithed hence, the practice of it pre dates the law. Even so levitical priesthood was change, since Abraham tithed to a gentile priest, Christian too ought to tithe and follow Abraham footstep. While this make sense, who was exactly the gentile priest that Abraham tithed? Was it not Melchizedek - without father, without mother, without genealogy, having neither beginning of days nor end of life, but made like the Son of God, remains a priest continually.” Hebrews 7:3 NKJV. Melchizedek may actually be an Ephiphany of Christ, indeed it was an honour and a privilege for Abraham to give a tenth of his spoil of war. If I was in his shoes, I would likely do the same or even give more automatically without anyone prompting. Now, our high priest in the name of Jesus Christ is in the order of Melchizedek prieshood, He is alive and is ministering in midst of us and, unless Jesus Christ manifest in the flesh again, no mortal being is qualified to receive it in behalf of Him nor He give any instruction in the new testament that what is for Him is to be receive by merely mortal. That honor is only for Him and only Him. Some might say, tithing is understood by the heart not by the Law, our heart can be very deceitful, unless one can support the claim with the word of God, you are being deceived by your heart.

Today, christians are actually aware that levitical priesthood was change, the only bridge for them to practice it is through Abraham, the reason being is that it pre-dates the law but the system or rules governing the tithes are taken from the levical priesthood law since during Abraham, there was no specific law or rules that define what tithes is for. This should not be the case, if we are to acknowledge that levitical priesthood was change and at the same time practice it because it pre dates the law, the definition or the rules that define tithes should be adopted during Abraham time in which there was none. On top of that, no mortal in this world will be able to reach prieshood in the order of Melchizedek, that position was already taken by Jesus Christ and He is irreplaceable. Surely, no one who feared God will claim that He is a priesthood in the order of Melchizedek hence, worthy of that honor to receive tithes of everything that all christian believer possesses including the Jews and muslim since their faith was also rooted from Abraham. Ironically, Jews themselves don't tithe even if there forefather Abraham tithed, perhaps they are aware who is Melchizedek. Also, their rabbi are not from the line of Levi, they acknowledged that as a matter of fact, it would be a sin for them if they tithe to a priesthood that is not appointed righfully by Law to receive it. Yet, for us Christian who are not by blood related, somehow boldly claim that we are spiritually affiliated with the levites to whom was already change to Jesus Christ Himself.

In a final note, if we really think highly or really respect who God is, it should not be anyhow asked by anyone or required it in churches rather giving by what the heart desires, it does't matter whether more or less 10% as long as willing, able and cheerful. Actually, this is how Abraham give his 10%, not through the tithe system during the levitical priesthood. Abraham give the 10% voluntarily, while the people during levitical priesthood ministry were giving their 10% out of obligation because, how else will the levites live and perform their duties without support from the people since they were not given inheritance of the Land? But, in Jesus Christ prieshood ministry, to which He is likely aware that He is not able to receive it as He does not actually need it. In order for us to give to Him, He did say;

“Is it not to share your food with the hungry and to provide the poor wanderer with shelter— when you see the naked, to clothe them, and not to turn away from your own flesh and blood? Then your light will break forth like the dawn, and your healing will quickly appear; then your righteousness will go before you, and the glory of the Lord will be your rear guard. Then you will call, and the Lord will answer; you will cry for help, and he will say: Here am I. “If you do away with the yoke of oppression, with the pointing finger and malicious talk, and if you spend yourselves in behalf of the hungry and satisfy the needs of the oppressed, then your light will rise in the darkness, and your night will become like the noonday. The Lord will guide you always; he will satisfy your needs in a sun-scorched land and will strengthen your frame. You will be like a well-watered garden, like a spring whose waters never fail.” Isaiah 58:7-11 NIV

Tithe is Holy to Lord, It belongs to Him
Posted by Unknown at 9:37 PM