The Three Side of A Coin 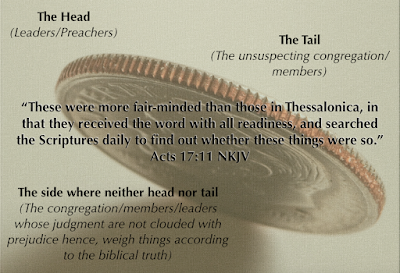 Note: I acknowledge that there is no suppose private interpretation of the bible scripture (II Peter 1:20) hence, I subject this writing to other spirit. Should you find my writing to be totally wrong, I would then appreciate if you could correct me and or rebuke me (II Timothy 3:16). Let's reason together (Isaiah 1:18) so as to bring the matter into the light, I can be reach at sherwincablao@gmail.com.

Why such churches that are so obvious to be fraudulent, may not be to some or perhaps to most especially those members of the church? And, why are these preachers so bold to ask money in front of their congregation and even on live TV yet still believe that they are not sinning against God?

Actually, there are 3 side of a coin. The head, the tail and neutral side (the side edges of the coin where neither head nor tail).

On the head side (the leaders/preachers), they have convinced themselves that they are entitled or it's their right in fact to receive something or milk their congregation. Most often with the support of this verse:

Moreover, if any man who does not give their tithes and offering, they are actually robbing God. As a believer who would want to rob God?

“Will a man rob God? Yet you have robbed Me! But you say, ‘In what way have we robbed You?’ In tithes and offerings. You are cursed with a curse, For you have robbed Me, Even this whole nation.” Malachi 3:8-9 NKJV

This is why, they deliver their messages relating to tithes and offering with such confidence and strong conviction that, in fact, if the congregation don't give their tithes and offering especially the tithes, they are actually robbing God hence, curses will be upon them. If you are the leader or preacher, would you want your congregation to be cursed? Of course not, you'll love the congregation so much that you don't want curses to be upon them but blessings. So, they encourage and encourage and plant that guilt feeling to the congregation for them to give their tithes so that curses will not be upon them. Can you blame the Preacher? It's not like, he/she just made up that commandment so that he/she can be entitled to ask money from the congregation. It's actually a commandment coming from God Himself (at least according to their biblical interpretation), that tithes ought to be given to God if not they will be cursed and that, these tithes are for the preacher of the word as God Himself gave ordinance to receive it by them.

On the tail side of a coin- the congregation, the ordinary member. It's likely impossible for them to see what's wrong in fact they don't see any wrong about it. Hence, when they heard news against the preacher such as having big houses, jets, cars that were bought coming from the donations of the congregation, from their perspective it's probably justified, it's their right after all and in fact they deserve it. This is the reason why over and over again, these kind of preachers are so confident and are so bold to ask money from their congregation in return for their service as a preacher because it's not like, they just made it up, they have the bible to support the claim.

On the neutral side of a coin to which neither head nor tail. These are members or outside the congregation to which their judgement are not prejudice or does not allow their judgement to be clouded with prejudice. As much as possible they weigh things and investigate, however they respect or think highly of their leaders or preacher, they judge based on biblical fact and no compromise. In this case, they would wonder or ask, is this really what God commanded? It really seems fraudulent? For me, if I have that feeling or intuition that something is wrong, then something really must be wrong. That kind of intuition or feeling especially involving the word of God, may perhaps one of God's way to talk to us that, really something is wrong, though, its up to us to be sensitive about it. But, how can we confirm that our intuition is right or wrong? Well, as Christians, the baseline or the foundation of our beliefs is none other than the bible, for a christian to know whether someone is fraudulent or abusive in authority, all he/she need to do is to counter check what the preacher said against the bible. Our intuition of something is wrong with what the preacher preach will be proven to be true or not only by counter checking what the bible really say.

As a believer we ought to know when to be on the tail side and when to be on the neutral side. If in doubt and seems like God gave you an understanding that seems really against the belief of majority in the congregation. Test it by sharing the understanding to other spirit, ask question, ask clarification and if they are not able to answer properly or unable to give answer at all, it's probably from God. Thats what I did, I thought I was going to be corrected but to my surprise, I was enlightened and I became even firmer that indeed, tithing and offering are widely interpreted by Christians in the wrong context either purposely or not. Now, I can see clearly why God said:

For on the one hand there is an annulling of the former commandment because of its weakness and unprofitableness," Hebrews 7:18 NKJV

Those who ask to practice tithing to which I believe prosperity gospel was deduced or was rooted from, the weakness and unprofitability of it will show in due time or already have manifested, thats why we see more and more preachers are being exposed. These preachers and even the followers of the practice may or may not be aware that they are actually sinning by misrepresenting who God is. On top of that, these preachers are leading a lot of people to the cliff.

Below are the links of my queries regarding tithing which I still open for correction should I be wrong.

1.0 The Tithing Principle, My Queries for Enlightenment
2.0 Will a Man Rob God
3.0 Jews do not Tithe Today

The Book that says it all:

An excerpt from the book "The Tithing Dilemma"


"Let me make it plain. From the biblical point of view, the ministers are stealing from the Levites the tithe that was designed to go to them (and exclusively to them), and the lay persons who give the ministers the tithe that should be going to the Levites are equally guilty by giving the sacred tithe to the wrong people! This activity is a disrespectful approach to (and a violation of) the laws of God. It shows an attitude of carelessness with the explicit commands of God."